A Taste of Moomba in Your Backyard Carnival Party

The Moomba Festival is a half-century old event that brings all of Melbourne together. It is a yearly event awaited by Australians for its parades, festivities, and lots of fun-filled family activities that are entirely free.

The concept of Moomba had its origin when the newly crowned Queen Elizabeth II toured Melbourne in 1954. The number of flag-waving people who piled on to the streets to get a glimpse of the Queen and revel at the occasion prompted the City Council and the City Development Association to hold an annual event and call it a “festival for the people”. Since then, the day is celebrated with a parade of elaborately decorated floats led by the year’s Queen of Moomba down Swanston Street.

Moomba is an Aboriginal word meaning, “let’s get together and have fun”. For so many years, that is what exactly the festival delivers when the day is celebrated by both young and old over the weekend before Labor Day. This year, the iconic festival returns to Melbourne on March 7 – 10 to mark its 60th birthday so expect the activities and entertainment to be bigger and better.

If you can’t be at the banks of the picturesque Yarra River to have a good time at the daily carnival and witness spectacular firework displays, there’s no reason why you can’t recreate the carnival atmosphere at home. Kids and adults will love your Moomba-inspired carnival theme party. Lucky for you, it’s no sweat to simulate the Moomba spirit to add fun to any event, such as birthday, fundraising, or a neighborhood get-together right in your own backyard without creating a dent in the pocket.

The Elements that Make a Successful Carnival Party

A backyard carnival is so much easier to put together than it seems. Apart from the help you can get from family and friends, there’s an online party store that can provide most of your carnival and circus party supplies, taking away much of the stress that usually comes with party planning. 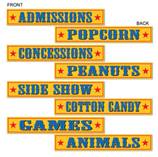 Decors: Stick to bright color party supplies like red, yellow and blue, and coordinate the rest of your trimmings to match the colors of your choice. Usually there are sets of party ware supplies that come in package and that makes your load lighter as you go.

Ticket, game and concession booths will complete your backyard carnival. To create them, cut the bottom of large boxes to fit over the ticket master and those others running the booths. Cut out a small window then cover the booths with crepe streamers. Place the sign “Ticket Booth” or use circus street signs that point guests to the right direction. Consider putting up stands for fortune telling, face painting/tattooing, and photo booth with circus photo prop. Dress up the booth masters in clown fancy dress and accessories.

Games: Again, the friendly online store comes to your aid when it’s time to play some games. Kids and adults will be delighted to hit the clown piñata and scramble to collect all the goodies that rain every successful hit, or challenge participants to the pin the nose on the clown game. Of course, you can transform the backyard into an amusement park using items you already have. Be as creative as possible to set up a bowling alley of soda bottles and tennis ball, or an exciting

Prizes: The best part of any carnival is the prizes to get every time a game is won. For a total carnival appeal, give winner tickets to be redeemed at the prize booth. Give corresponding points to items at the booth to inspire guests to win more games. Prizes can include stuffed animals, big top mini pinwheel, water guns, stickers, candies, key rings, and other novelty items

lemonade are not in the menu. But, you can recreate Moomba atmosphere by dishing out some of Melbourne’s delicious cuisine from around the world. Serve tasty pizzas with flavors from the Middle East or impress your guests with mouth-watering tiger-prawn spring rolls with sweet and sour dip paired with spicy slow-cooked pork ribs. Don’t just let the cupcakes melt under the sun. Decorate them with big top cupcake toppers as if inviting each guest to take one.

What a way to put everyone in the mood to step right up to your mini-Moomba carnival party and experience a piece of Melbourne. When it’s time to close the booths, give your guests a popcorn treat bag filled with goodies they can bring home. With the success of the party, don’t be surprised if it becomes an annual neighbourhood event, just like the Moomba festival.