Celebrate Australian Open with a Party at Home with Friends

Australians don’t seem to run out of reasons to party all year round. Now that January is here, there’s more to summer and balmy nights to heat up everyone’s party mood to fever pitch again – the Australian Open.

It’s no secret that Australian Open is the toughest tennis tournament held annually in Melbourne every last fortnight of January. Sports fans eagerly await this, which is one of the world’s four Grand Slam tennis tournaments. The other three are the French Open, Wimbledon and the US Open, being held in their respective country of origin. Since 1905 when Australian Open was first held, there had been several divisions featured in the tournament, including men’s and women’s singles, mixed doubles, junior’s championships, wheelchair, legends, and exhibition games. Today, it even boasts of indoor events being played in two primary courts equipped with retractable roofs to shield athletes and audience from wet weather or extreme heat.

The 2014 Australian Open is happening from January 14 to 27. It’s the perfect excuse to throw your first party for the year. Shortly, it’s hitting the country, but you still have plenty of time to oil up your party machine, stock the fridge, invite some friends, and source your party and catering supplies from an online shop for stress-free preparation. With these items taken care from the very start, what else is on the list to set up a homey Australian Open party?

Party Theme and Decorations. Like most sports enthusiasts, you probably want 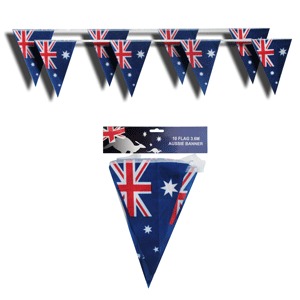 to be at the Melbourne Park or the Rod Laver Arena to cheer for the current champion Novak Djokovic. However, being absent from the front row doesn’t mean you can’t enjoy the games at home in the company of your friends. Use the few remaining days to prep up the place and replicate what you’ll be missing in the actual venue. So start filling the party zone with triangular Australian flag bunting, a fitting prop for the sporting event and Australia Day as well. Who’ll even notice you’re using the same Melb Cup insta-theme upper deck stadium as backdrop? The idea here is to create an audience-packed ambience for your guests to feel they are watching a game with tennis-crazed spectators.

Food and Drinks. One great thing about throwing a party for a sporting event is that you don’t need to prepare complicated dishes. With Australian Open almost

around Australia Day when everyone seems to be craving for barbeque, you may as well go with the flow by serving grilled food if that is what tradition dictates. Appetizers can be as light as grilled jumbo shrimps with avocado cubes tucked in by Australian flag tooth picks.

Other barbeque fares may include lamb and vegetable kebab or sweet and spicy sticky ribs. Your figure-conscious guests will not be able to resist your offering of chocolate-raspberry cupcakes and iced cappuccino. Let the nibbling continue as everyone settles down to watch the live streaming of the games. Serve healthy pumpkin pie bars and cheesy beef nachos. Fill the bar with lots of sodas and juices to digest all the mouth-watering dishes you prepared, and to cool down the atmosphere once the games heat up.

You’ll end up worn out even before knowing the results of the first round. Soon the guests will leave, thankful for the awesome party you put up as a salute to two annual Australian events. There you are savoring the victory of your tennis champion and feeling patriotic. Most of all, you can’t help but admire yourself for being smart to use Australia table wear – leaving you with no dirty dishes to wash after the games are over.