Dressing Up to Nines for a Music-Themed Party

The eras of 60s, 70s and 80s are characterized by fashion trends distinctive to each decade. The world has seen diverse fashion statements mirroring the social situations prevalent during the respective period. These are the times when fashion designers were in their most imaginative best to dress up people not particularly for comfort, but for style ranging from elegance to hip, fun, excessive, and anything to bring out one’s personality.

Attending a party with a theme around these colorful epochs should be fun and creative in order to evoke the spirit of the past; thus, much is needed than just delicious beverages and a varied menu. Whether you’ve been invited to a 60s, 70s or 80s music theme party, the ideal way to get inspiration is to visit the rich ground of an online site to pick the best wear for the period you’re representing.

Here’s a guide on how to put together the perfect costume for a music-themed party.

The Sixties: It was a decade of many political and social movements such as civil

rights, feminism, rock and roll, flower power, and the youth revolution. Streamlining a costume ensemble can be a challenge because of the mixed choices. However, you can’t be wrong if you go Mod because it was the era of British music invasion. Or celebrate the peace movement by wearing a Hippie girl dress costume complete with peace Hippie jewellery. Men can transform into one of the unusual images of the sixties by donning army camouflage to look like a Vietnam War soldier. Other costume options can be as an Apollo 11 astronaut, a Black Panther activist, the swashbuckler James Bond, or wear the mop-top haircut, boots, and psychedelic Sgt. Pepper’s trousers popularized by the Beatles. 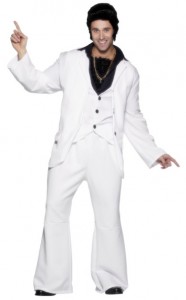 The Groovy ‘70s: Fashion in the 70s took its form from the late ‘60s, only it was a bit more flamboyant in perfecting and exaggerating the elements of the past decade. It can’t be that difficult to put up an outfit inspired by what people were sporting during the ‘70s. Tunics, pant suits, and cowl neck sweaters are to be found in every woman’s closet, while men would have a few V-neck velour shirts, tight fitting pants, and sandals. Many choices will allow you to dress in the likes of The Village People, Charlie’s Angels, or Starsky and Hutch. Nevertheless, the iconic look that tops it all was the disco costume with butterfly collar shirt and bell-bottom pants popularized by John Travolta in the hit movie “Saturday Night Fever”. Other fashion staples to consider are Indian headband, feather necklace, Afro wig, and platform boots.

It’s even easier to think out of the box by personalizing your look as a glimpse of the past. To become the sassiest girl in the party, sway that honey blonde Farrah Fawcett wig as you groove in your leather blazer and groovy babe flare costume. Guys can achieve the signature 70s look by wearing khaki pants topped with Hawaiian shirt, gold chain, large sunglasses, sideburns, and chest hair.

The Millennial ‘80s: It was the epoch of economic liberalization and the dawn of 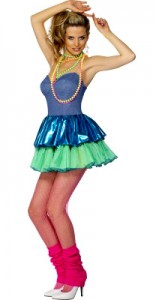 modern computer technology when Internet was introduced. Fashion amidst nuclear threats, international wars, and terrorist attacks was bordering along the lines of heavy metal, punk and glittery clothing. Girls can spend some time choosing to come wearing either a material girl costume or as Olivia Newton John in a Let’s Get Physical outfit. Leg warmers can be worn to achieve that complete disco girl look. Men would have many costume choices including Michael Jackson’s Billie Jean outfit with the signature white socks and gloves and the all-black punk set that can be accessorized with a silver spike wrist band. Significant fashion trends for men during the decade include Ray-Ban Aviator and Wayfarer

One way of dressing up for a particular period is to think of an iconic personality that made a mark during the time. You may also consider getting some ideas from TV series popular then. Once you’ve picked a certain fashion style, assemble all the pieces together to create the look. When you put them on, try to be your own judge whether or not you’ve become the person you’re representing exactly to a T.