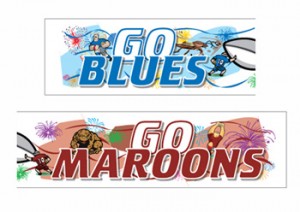 Gotta love this time of the year when it’s state against state and mate against mate. State of Origin history is rich and colourful especially when reflecting on great players and the riveting games from the past. State of Origin is the annual best-of-three series of rugby league football matches between state giants New South Wales Blues and Queensland Maroons. The state of Origin series started in 1982 and is usually played in the middle of the rugby league season with about a months break between each game. Celebrate the occasion in style this year with a new range of all NSW and Queensland State of Origin Party Supplies including balloons, banners, costumes, decorations, horns, wigs and more.