Scout Hike is a weekend event that starts on a Friday evening when Scouts are bused in and checked into sleep points (usually, there are six). The next two days are spent hiking, catching up on friends, and getting several hours of sleep to prepare the Scouts for the first day of camping.

There are 28 Activity Bases scattered throughout the campsite with each Patrol group completing activities to earn points related to the objectives of each base. Incidentally, completing each Activity Base brings each group closer to where they will camp/sleep for the night.

For this year, the theme of the Scout Hike was “TV and Movies”, and as part of the 1st Bayview Sea Scouts (nine of were Leaders/Assistant Scout Leaders and two were Venturers), we decided to bring Party Supplies Online to the forefront of the activities by using our products for the theming. You can see Party Supplies Online in action through the pictures below. 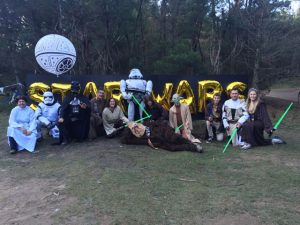 The 1st Bayview Sea Scouts set up a base in the forest, which we aptly called “Star Wars”. We used gold letter megaloons to spell out S-T-A-R-W-A-R-S and we hung the balloons on a black backdrop, there creating a flashy, eye-catching banner. With a sign like that, it was impossible for the kids to miss our base.

To make the base even more appealing, we had ‘Darth Vader’ stand under a 3-foot giant round balloon that we designed with a thick black marker to make into the ‘Death Star’. As an added visual bonus, we used Storm Trooper and R2-D2 airwalker balloons to decorate the base. 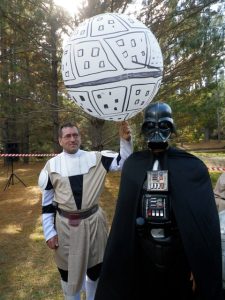 Because we wanted to take the “TV and Movies” theme to an entirely different level, we, the scout leaders and venturers, decided to dress up as “Star Wars” characters using party costumes from Party Supplies Online. We dared turn into Princess Leia, Anakin, Darth Vader, Obi Wan Kanobi, Yoda, and Chewbacca while others dressed as male and female Jedi Knights and Jawas. 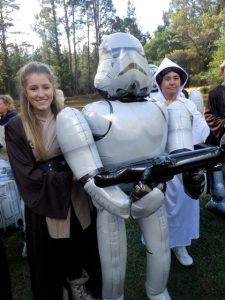 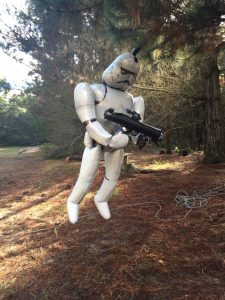 The experience was exhilarating, tiresome, and fun. We also had a blast awarding the contest winners, as you can see in the picture below. 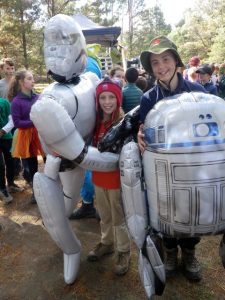