Festival at a Glance: Best Beer Tents to Be this Oktoberfest

The Oktoberfest (or Wies’n as the locals call the celebration) started in Munich more than a century ago in October 12, 1810. This 2016, the Oktobefest celebration started last September 17 and will last till the third of October (in Germany, at least). The celebration originated from the celebration of the wedding of Prince Ludwig of Bavaria and Princess Therese of Saxony-Hildburghausen. 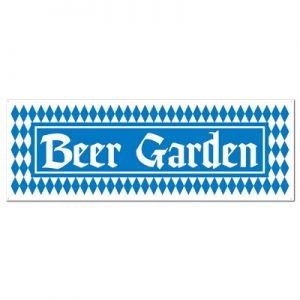 At present, there are now 14 beer tents in Munich representing all the major breweries with 21 smaller tents that serve schnapps and wine during the 2-week Oktoberfest event. With over 103 acres of land to host the celebrations, you might be confused with the number of options that you have for the event. With a total sitting capacity of 100,000, let us give you an idea on the best places to be to enjoy the best beer and the best entertainment while partying in Munich.

With a capacity of 9, 920 people sitting, standing, and outdoors, the Hofbrau Haus Beer Hall is considered as one the most fun and wildest places to be during the Oktoberfest. The area decorated with festive Oktoberfest-inspired decorations is also considered as the most favorite tent among international visitors. British, Americans, Italians, and Austrians are among the most common types of nationalities you’ll mingle with in the tent beside the locals. Music is one of the favorite things as well in this area, with John Denver song “Country Roads” being sang and played frequently in the tent.

Although the decorations are sometimes overlooked due to the great beer and fun crowd, it is considered as one of the prettiest among all 14 big tents. Natural light comes in the area and the ceiling is decorated with large leafy green rings. This is also one of the few tents where you can buy wine instead of the usual beer. 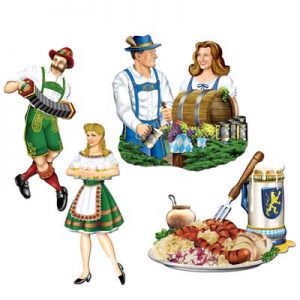 The massive tent hosted by the Hacker-Pschorr brewery is also a favorite place for locals and international visitors. It has a 9,300 capacity with 6,900 sitting and standing areas indoors and 2,400 outdoors decorated colorfully with Oktoberfest symbols.

The tent features its well-designed magical painted ceiling featuring murals of the old world Munich under a dreamy blue sky with puffy white pristine clouds. The roof ceiling can be opened and closed depending on the weather.

This is also a favorite among film enthusiast and photographers. Rock and roll live music entertains the crowd at night during the festivities.

Fun is synonymous to what the Schutzen tent offers. It has been serving and hosting Oktoberfest celebrations at the foot of the Lady Bavaria Statue since the 1926. The hall is decorated with tonnes of blue, red, green, and yellow garlands, bringing life to the inside of the tent. German hits and American classic music are also featured indoors. 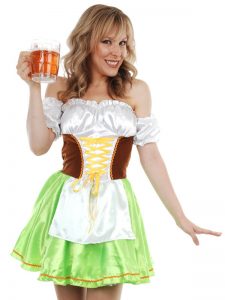 With a total capacity of 6,500 people, the big tent also boasts of its large beer maid mural above the 2nd floor balcony. Wine can also be purchased inside the tent.

Generally, beer tents are open from 10am to 11:30pm during weekdays and on weekends at 9am to 11:30pm. Reservations are usually booked 8 months ahead of the time due to the overwhelming number of people attending the Oktoberfest festivities, although some tents can be accessed even without a reservation. Lunch, afternoon, and evening slots are available for reservation.

Do not miss these areas while you party like a local in your Oktoberfest outfits where the festive celebration have originated – Munich, Germany.