How Halloween Costumes Came to Be

With the Halloween season fast approaching, people are rushing about to come up with unique Halloween costumes they can flaunt during trick or treat or during the Halloween 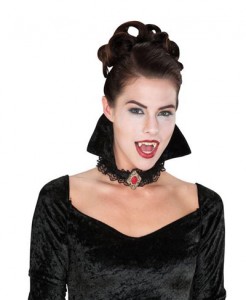 parties. However, what exactly is Halloween, and how did these costumes come about?

How did Halloween begin?

Halloween is a celebration traced from the Celtic festival of Samhain, the season where roaming ghosts and ghouls were believed to wander on earth and invade human habitations. To shoo away these bad spirits, people would usually make bonfires and don costumes, which were inspired by the season.

Towards the turn of the 18th century, Pope Gregory III formally declared November 1 each year as All Saints’ Day. The eve of All Saints’ Day was dubbed as All Hallows’ Eve and evolved into Halloween. Through the course of time, Halloween grew into a social event that became widely celebrated all over the globe.

During the 18th century, people in the United Kingdom, especially those in remote areas,

observed Halloween as a rite of fertility to ask for good harvest and other blessings from the gods. In urban areas, people celebrated it like a fiesta, complete with carnivals and costume parades. However, as it found its way entering US territory as introduced by migrants from Europe, the festival was tailored to fit the place’s domestic atmosphere as influenced by the Victorian era. People celebrated it privately, with emphasis on children getting the most fun out of it.

How did Halloween costumes come about?

Halloween costumes are worn during the eve of All Saints’ Day when people young and old are wandering in the streets and trick or treating. The idea is to wear something to emulate scary or supernatural figures. Just like any other celebration where people dress up to the occasion, Halloween Festival gives people the chance to show off themed suits that liken themselves to witches, vampires, ghosts, zombies, goblins, monsters, or ghouls. In fact, the earlier versions dwelt on pagan and Celtic themes. People who wore costumes in earlier times were called “guisers”.

How did the costume evolve through time and space?

Over time, Halloween attires evolved, too, and started to veer away from the clichéd horror

looks into more creative ones such as fairy tale characters, Disney heroes and heroines, doctors, engineers, teachers, and scientists. At present, most people have totally given up the creepy ouch and emulated pop stars, singing sensations, matinee idols, sports icons, or even superheroes.

People have also started to draw inspiration from figures in the pop culture such as athletes, TV series characters, political leaders, or literary icons. Men and women have even made the event an excuse to wear something daring and revealing, flaunting off greater skin than is necessary.

What do people do during Halloween?

Aside from endless partying and merry-making, Halloween is celebrated trick-or-treating where children hop from one house to another and knock on doors to ask for candies and other party

favors. This is also named “guising” as children are dressed up representing fancy characters like Dracula or Harry Potter. Guising can be likened to caroling during the yuletide season. To make the show even more realistic, they bring along Jack-o lanterns. Since it is also a celebration of superstition, people believe that Halloween is a good way to welcome the cold season.

The evolving trend of celebrations and festivals can sometimes be gleaned from the fusion, reinvention, or recreation of these cultural practices to fit a particular culture’s sensibilities and needs. The bottom line is that, no matter how far each event has evolved, knowing and tracing its roots and origin always helps people understand and appreciate more whatever it is that they are celebrating.