If your kid wants to feel like a king, knight, queen, or princess on his/her next birthday, a medieval theme party is just the right idea that is sure to transform everyone back to the Dark and Middle Ages. The Medieval Era spanned approximately from 500 to 1500 AD, when the Roman Empire ended and the modern world was beginning to emerge. It is the middle period of the three traditional periods that divide Western history: Antiquity, Medieval, and the Modern period.

Planning a medieval party for kids requires you to do two things. First, you need to wear the legendary crown to mean you’re the real ruler and master of the show. Second, if you want to put up an impressive show, you need to go all out with costumes. For that, a one-stop online shop can be your source of Medieval costumes for girls and knight crusader costumes for boys, as well as scene-setters to create an ambience that can put everyone into the spirit of the Middle Ages.

It is important to decide on how many guests to invite to the party. Your kid may have many friends, but inviting them all may be difficult to keep up with the medieval theme. Keep in mind that everyone must be coming in costume thus a medieval party is not the type of party to invite shy people who would be 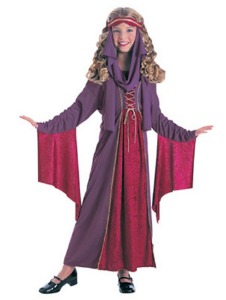 uncomfortable dressing up and acting out certain roles. A well-chosen small group of ten to fifteen people is ideal to include in the guest list, a convenient crowd to have a fun party without breaking the bank.

Use royal fonts like Lucida Calligraphy to print and create a royal invitation from your home computer. A rolled parchment paper tied with red ribbon and scripted with royal decree to request the presence of your guests makes an attention-grabbing introduction to detail the date, time, and venue of the party. You need to assign characters to each guest to help them pick their costumes and give them idea on how to act the part properly. Important characters during the period include King Arthur, Queen Matilda, Countess Elizabeth, Duchess of Drink, Royal Jester, etc. Guests with nobility roles can come wearing a king’s robe and crown, or as Gothic princess and Maid Marion. Those assigned as peasants can come in poor Victorian costume or any brown and gray coarse fabric. To add more fun, send the invites together with the full list of guests and character’s name to start a guessing game even before the party has begun.

Of Castles and Dungeons 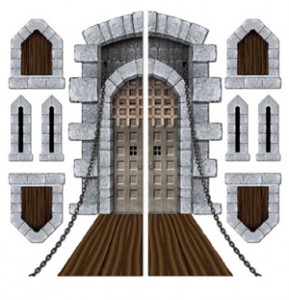 Decorating for a medieval themed party is as easy as simply turning off the lights and using some candles to create the luxurious silhouette of medieval palaces. For the nobles’ grand entrance, lay down a disposable red table cover leading to the great hall. If you have plenty of walls, cover them with castle door and window props to transform the area into a medieval hall instantly. Hang a dungeon door with peering spooky eyes in one corner to remind your knights about their bravery. All these backdrops serve as excellent photo booth background. Have plenty of knight swords with sheath 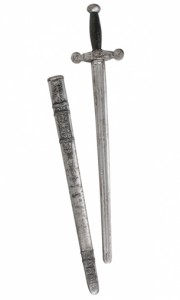 and Viking medieval shields just in case your guests in shining armor need to rescue some damsels from the dragon’s clutch.

Play traditional medieval music downloaded on your mp3. Search the internet for sound tracks of music with instruments like the bagpipe, harp, and the lute. Your guests will be delighted to hear their name being announced with the “Hear Ye! Hear Ye!” fun fare blare of the court jester’s trumpet.

A Feast Fit for Medieval Royals

During the medieval era, the menu for upper classes largely consisted of meat and fowl dishes. If you want to serve authentic medieval foods, prepare main dishes of steak, lamb chops, or roast pork. However, for the wee royals attending the feast, serve finger foods in the likes of roasted chicken legs, skewered hotdogs, cheese, potato pancakes, and chocolate dipped fruit chunks. It was also common to have different varieties of bread on royal

buffets, so carve out bread bowls and fill them with macaroni and cheese. Have a merry mix of apple juice with club soda and let the partying knights toast their drinks up in economy wine goblets before all the real action takes place.

After feeding the bunch, move on to the exciting activities you’ve planned for the party. Set up medieval games such as jousting and tribal wars using foam as weapon. You can also invite some performers to delight the kids with a choreographed sword fight. Another activity is to launch a scavenger hunt for the dragon’s eggs using Easter eggs filled with sweet treats to reward the lucky hunter.

Reserve one part of the area as the workshop or tool making shed, where both the nobles and peasants can become blacksmiths to fashion out traditional medieval crafts using clay and other pre-bought soap stone carving sets. This will keep them busy in making their own favors. Plan for a magic potion relay, participated by two opposing teams racing to fill a bucket with water using their goblet. A game of pin the tail on the royal donkey is also a sure hit to match the juggling stunts of the court jester.

As parents arrive to pick up the royal guests, hand out a gold paper loot bag to contain each child’s stash of treasure: candies, chocolate coins, gold bars, tiaras, headboppers, and other royal rewards from the medieval imperial throne.